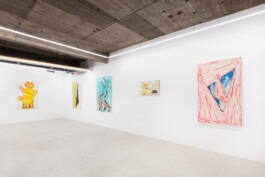 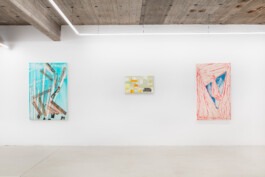 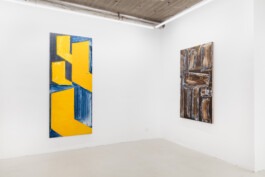 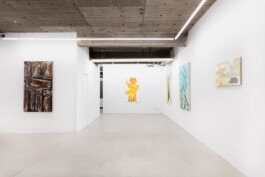 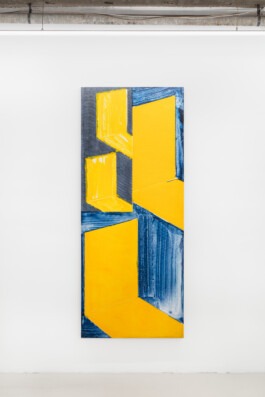 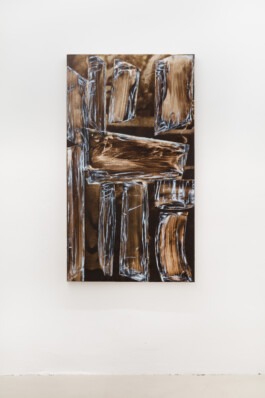 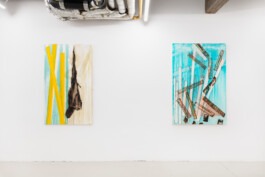 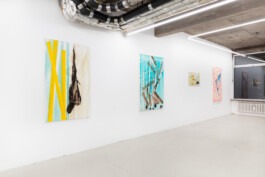 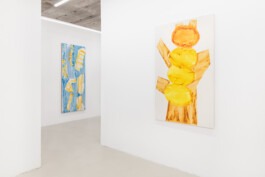 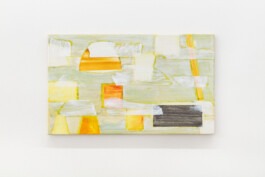 All photos by Stefan Hähnel

The search for the unknown is perhaps the main underlying motive of Toon Verhoef‘s paintings. It is moreover how he directs the viewer‘s gaze. Initially we may wonder what exactly we‘re looking at, but as we attempt to grasp this the painting slowly but surely draws us in. At that point we can only conclude that we‘ve arrived in a world where references to reality – which Verhoef adopts as points of departure – present themselves at most as echoes from another life. On the canvas these enter a new context where meaning dissolves and everything revolves around creating an exciting and perfect balance that he continually disrupts at the same time.

Verhoef‘s large and abstract-looking paintings are full of contradictions. There are forms that float, clash or adopt a firm stance, lines that seem to circumscribe spaces while there seems to be no evidence of space or depth. In his compositions Verhoef plays with mirroring, repetition, reversal and overlapping. Always in perfect balance, but just barely, as if it all could tumble over the edge at any moment.

In a series from 2019 this is the way in which he plays with forms that could be designated – driftwood, bookends, tree trunks perhaps – but which are stripped of any meaning on the canvas. They have been reduced to rudimentary forms, which the artist freely scatters about, multiplies, increases and decreases in size. And to this he adds, elsewhere in the image – as a collage-like visual echo – a contrast: a repetition or variation on this, which disrupts and causes friction but simultaneously reinforces the composition as a whole.

Ever since he started painting Verhoef has always tried to avoid a personal handwriting: a paradoxical wish that stems from minimalism, which influenced him profoundly. While he does carry out his paintings himself, all of the spontaneity, stylistic suppleness and intuition lies in the drawings on which they are based. The translation into paint and canvas gives the painting the quality of a product. This involves making imprints, working evenly with a wide brush, sometimes forcing the paint in the right direction with his arm and drawing lines with the aid of tape – as if he is merely executing the work remotely. As a result each work is completely independent in its own enigmatic way. The fact that we can keep on looking at them without comprehending them also has to do with Verhoef‘s way of subtly incorporating multiple layers into the painting. Not only does he paint directly onto the linen, but also onto the front and back sides of a thin and transparent layer of binding agent which he later affixes to the canvas. This gives rise to a literally stratified image in which – entirely in accordance with the legacy of minimalism – he suggests no illusion whatsoever, but nonetheless does allow space to enter the image unseen.

Liberating himself from his own visual baggage is another dilemma that continually surfaces throughout Verhoef‘s oeuvre. Liberating himself from painters such as Velazquez, De Chirico and Munch, from the architecture of Argentina, where he grew up, and from his predilection for films like those of Godard. They influenced his way of thinking and acting and gave shape to his visual language, but every painting is an attempt to pull himself away from that in the hope of finding something new. Perhaps that is why the work is in constant motion between bold certainty and hesitation, between restlessness and calm, and between vague transparent aspects and distinctly present forms. It is how Verhoef creates new worlds and forces the viewer, too, to become free of familiar patterns of thought and observation. Each work by Verhoef is thus a surprising and, at the same time, meditative exploration of the system of coincidental elements that often make up our surroundings, and which Verhoef has made part of his painting.